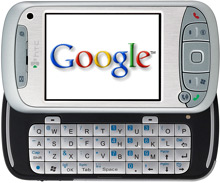 The search engine giant and Web portal Google and the U.K.’s Orange are in serious discussions about creating a Googlephone. (That might not be its name, but we’ll call it that for now, just like we used to call the Apple phone the iPhone.)

So this Googlephone, possibly made by HTC, will come preloaded with all kinds of good Google stuff, like Gmail, Google Maps, and Google Earth (no need for a GPS add-on at that point). And, we suppose, it’s not too much of a stretch to imagine a Google smartphone that comes preloaded with all manner of Web applications, like the Office-lookalikes that Google is now touting and, of course, a Web browser that comes with lots of pages that have lots of Google ads on them.

There isn’t much more to tell at this point. Google isn’t talking much except not to deny that talks are taking place. Orange isn’t talking, either, except to Google.