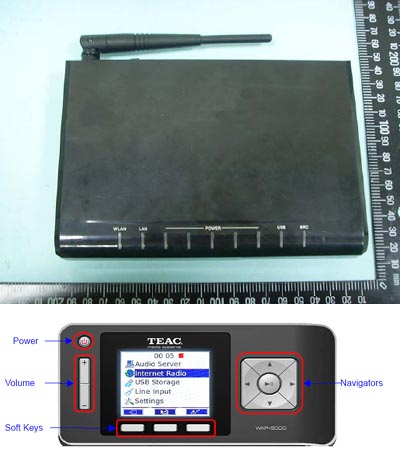 Some company named Sporton International sent a wireless router-like thing to the FCC for approval and they got their wish. The AudioMate Wireless Digital Media System can apparently hop onto your 802.11b/g WiFi network (or through an ethernet cable) and stream audio from your computer’s hard drive to your beefy home stereo system. Unfortunately, I don’t see any ports for a video signal, so you’re apparently restricted to an aural experience. Bear in mind, though, that you can access Internet Radio on this thing, as well as music via the USB port.

The system is composed of two parts: the wireless audio receiver (HCR-102, top) and the bidirectional remote control (BRC-220, bottom). The latter communicates with the former via Bluetooth 2.0, providing up to 100 meters of range in a “clean open area.” Interestingly, the remote itself looks almost like an MP3 player on its own, complete with a color display for navigation (you’ll need that for the setup process). The receiver also has a phone jack, for whatever reason.

File support includes WAV, MP3, AAC, AAC+, and WMA. And don’t worry about your wireless security, as the AudioMate will happily enjoy WPA Personal, WPA2-AES, and 64/128-bit WEP encryption. And as per usual, no word on pricing or availability.