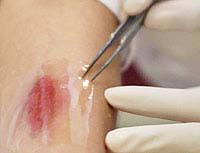 Don’t tell the Berkeley City Council about this.

You’ll remember that that group of lawmakers is aiming to regulate the environmental effects of nanotechnology research. Well, with that kind of chilling in the city of Akron, we’d never have this sort of thing.

Researchers at the University of Akron, Ohio, have gussied up their nanofiber bandage and taken it on the road, for a trial in Colombia. Tests conclude at the end of this month, and the scientists hope to get FDA approval soon after.

Their bandage is actually a collection of super-fine polymer fibers that have running throughout them chemicals that help a wound receive oxygen. The fibers cut down on inflammation, do a number on bacteria, and overall decrease a wound’s healing time.

Particularly welcome to the diabetics among us is the line item that the bandage’s dressing releases nitric oxide gas, which diabetics desperately need but can’t get enough of from their bodies.

The scientists estimate that the bandages would be in wide release by 2008 for sure, if everything goes according to plan.