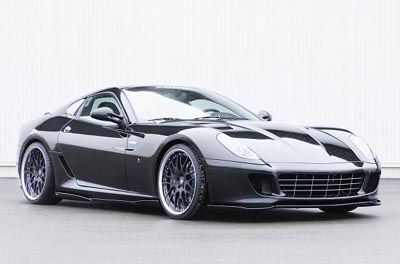 Excuse me as I wipe the drool off my keyboard. This Ferrari 599 GTB, done up by those geniuses at Hamann, has got to be one of the greatest looking supercars ever made. If there was ever such a thing as sex on wheels, this has got to be it. Sure, a garden variety Ferrari might be enough for some people, but those who want their super-powered sports car to look its absolute best, you can’t really go wrong with turning to the tuners at Hamann.

They’ve slapped on some great looking black with polished lip wheels, along with an aggressive yet not-over-the-top body kit that accentuates the pre-existing lines on the 599 GTB. You won’t find any crazy Lambo-style doors or an oversized GT wing. In fact, it doesn’t even seem like they touched the engine (the Ferrari’s got to be fast enough on its own already), slapping on a sick custom exhaust instead. It’s got carbon fiber up the wazoo to complement that midnight black paint job: stealthy yet eye-catching at the same time.