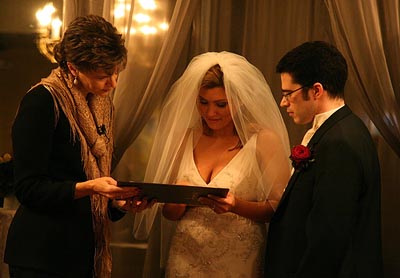 … and get married, you get the geekiest wedding on the planet. They even read their wedding vows off of a UMPC. What’s more, it was the blushing bride’s idea!

There’s been no confirmation by the happy couple, but Julie Leung is venturing a guess that the UMPCs involved were the not so favorably reviewed TabletKiosk eo v7110s. What? At least if you’re going to geek on, do it in style and use something that people actually want (well, I shouldn’t say that because apparently one of the UMPCs was stolen during the wedding/reception).

And yes, your eyes are not deceiving you. That is a laptop wedding cake. Special thanks to Scott Beale of Laughing Squid for the UMPC vow pic.