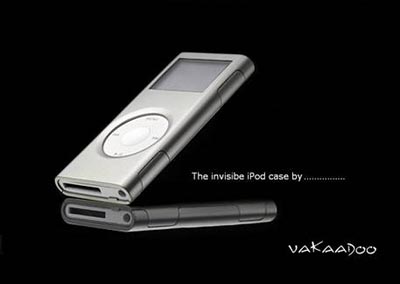 Part of the reason why you wanted an iPod in the first place was that it’s quite the fashionable accessory. Why hide it behind an ugly case when you can protect it and let its natural beauty come shining through with the invisible iPod case. It’s impossibly clear, just as the the new shuffle is “impossibly small” and the new nano is “completely remastered.”

Available from Vakaadoo, the invisible iPod case (for the second-gen nano) is just what you’d expect it to be: probably made of clear acrylic, and probably strong enough to withstand the odd bump or bruise.

This is in stark contrast to the company’s iVak line of cases which come in a whole whack of interchangeable colors. You can have a bright yellow front and a baby blue back, a lime green front and hot pink back, or any combination in between. I’ll take the clear one, thanks.

No word on pricing, but you’ve got to love the prospect of combining the invisible iPod case with the iPod Inviso.

UPDATE: Turns out the Invisible iPod Case isn’t exactly invisible. It’s not even clear. According to an email from Vakaadoo, it’s just a case that’s painted almost the same color as the nano within, giving an “invisible case”-like effect.