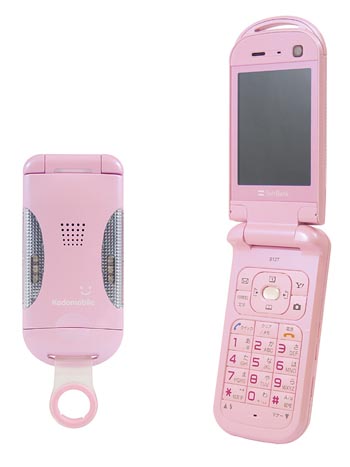 While phones designed for kids on our side of the ocean come with minimal features and infinitely simple interfaces (the Firefly and Migo, for example), over in Japan, the children are just as tech-savvy as their UMPC-touting parents. Softbank Mobile has just added the Toshiba 812T clamshell — in pink and blue, for girls and boys — to its lineup, and it comes with a nifty security feature. Pull out the tab in the bottom and it beams the child’s location to the appropriate contacts.

Not only does the 812T boast GPS (hence its ability to know exactly where the kid is when he or she pulls the tab), but when that tab is pulled, it also lets out a “crime prevention buzzer.” This phone’s got 3G too, you know, for when the kids need to catch up on stock quotes, watch the news, or do their mobile banking. Oh, I guess video calls would be handy too (via WCDMA).

Rounding out the specs to this kid-friendly cell phone are a 3 megapixel camera, microSD expansion, and probably a media player of some kind. You can also note the talk and standby times of 190 minutes and 470 hours respectively, with measurements coming in at 49 x 93 x 24mm. Weight is 118 grams.