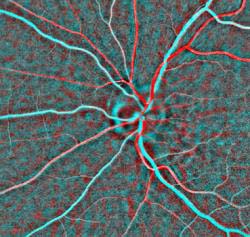 As this nearsighted writer can attest, the human eye is not the sharpest vision source on the planet. For starters, we can’t even see all the shades of the spectrum. For that matter, neither can those digital cameras that we use to document our life histories.

A new handheld device out of the U.K., however, promises to enlighten us a fair bit in terms of “seeing” invisible objects. The long name is the Image Replication Imaging Spectrometer, but we’ll call it by its acronym, which is IRIS. It was developed by a team of scientists at Heriot-Watt University, and it’s small enough to fit in your hands, which means that you can take it with you into the field, the lab, or the war zone.

Just like the human iris, IRIS sees things. Unlike our eyes, however, IRIS sees much more, 32 colors, to be exact. The device divides an image into 32 separate snapshots, each one focusing on just one spectral band. Then, the snapshots are analyzed side-by-side on a detector. The final result is translation back into something that the human eye can assimilate, resulting in a richer color palette that we can actually see.

Cutting through the technical jargon a bit, this kind of device can help us see in the dark a little better or to differentiate between a camouflage object and its surroundings. Military uses would include finding people and weapons that wanted to blend in with their surroundings.

The U.K. scientists, though, are looking at this as a medical tool. Specifically, they are eyeballing retinas to distinguish between oxygenated and deoxygenated blood, which is a telltale sign of eye disease, and discover problems with retinal blood flow, which can lead to diabetes. Rather ironic, that, a device named IRIS fighting eye disease.