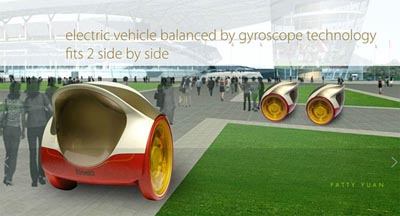 Designer Patty Yuan has come up with an all-new peoplemover concept that may soon become all the rage in China. It’s a two-wheeling ball of a vehicle that runs on just two wheels, much like the Segway except it’s got a roof over its head and you’ll be sitting instead of standing. In this way, it could very well be an excellent “personal commuter” solution for “young entrepreneurs.”

Camper is a manufacturer of many different things, including shoes, and Yuan hopes that they will consider her “Lotus” design as part of their upcoming lineup (not of shoes). The Lotus keeps balanced on its two wheels via gyroscope technology (again, like the Segway) and because it’s fully electric (a plug-in, in fact), it gives out absolutely zero emissions.

Yuan is saying that it is perfect for the increasingly crowded cities of China. It cuts down transportation costs as well as air pollution, and it should be a cinch to park with its minimal footprint.