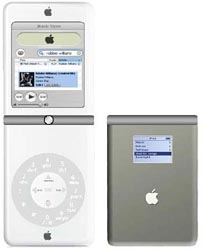 Just as they went palette crazy with the second-generation iPod nano, it seems that Apple is going to be announcing their iPhone in not only the glossy white (and black) we all know and love, but also in “all colors of the rainbow.”

Kevin Rose of Digg.com “confirmed” a bunch of iPhone details last week, but analyst Rebecca Runkle of Morgan Stanley disagrees on several points. For starters, the price points for the 4GB and 8GB iPhone, she says, will be $599 and $649 respectively (Rose said $249/$449).

Moreover, it won’t be as girthful as the iPod Video, but it’ll certainly be fuller in the waist than the nano. Moreover, it’ll boast a fairly large 3.5-inch color display, accompanied by “multi-colored aluminum shells like the Nano.” We won’t know for sure until his Royal Jobsness hits the stage at MacWorld, so yeah, just munch on that grain of salt in the meantime.