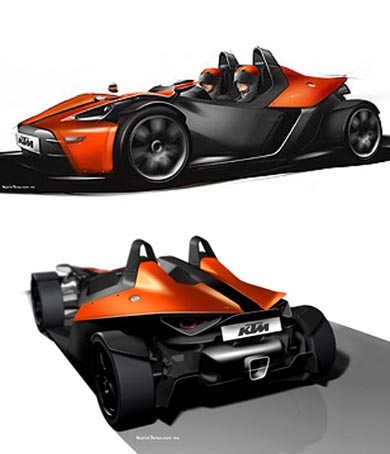 You’ll notice that it’s missing a roof, but so are a lot of sweet-looking roadster concepts. The X-Bow is the lovechild of a relationship between KTM and Audi. KTM is a motorcycle maker based out of Austria, whereas Audi focuses more on the luxury sedan end of things. Although it runs on four wheels, I’d have to say that the X-Bow fits better within KTM’s portfolio.

That said, this aggressively-styled roadster is powered by an Audi engine and makes use of several Audi components (it was also known as the Audi Crossbow during development). It’s good for about 220 horsepower, putting it in about the same league as a Lotus or Honda S2000. Mass production is still up in the air — they’re talking with Magna Steyr — but we know that they’ll be at least doing the limited production run of 100 units. Whether any of those make it to North America remains to be seen.

Look for the X-Bow roadster, however it is branded, to make its official debut at the Geneva Motor Show in March.