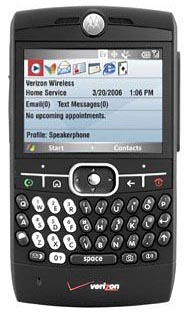 I’ve noticed something about the world of electronics, both in the home and the portable stuff: Years ago, pretty much anything you bought came in any color you wanted, provided that you wanted black. Then, around the turn of the millennium, we saw a big push toward silver for cell phones, DVD players, everything. It seems we’re heading back toward the darker shade of things as Verizon has just unveiled a black variant of the Motorola Q super slim smartphone.

As you’d probably expect, the actual features remain identical to its silver cousin, meaning it has the same QWERTY keyboard, same WiFi-less connectivity, and the same 1.3 megapixel camera. The sticker price — $199 — remains the same, but you’ll notice that the “rebate” is only $50, compared to the $100 you get with the silver Moto Q. The net result, then, is a $50 premium for the black Q.

Thankfully, it’s not just a black paintjob: the material underneath is black too, so a couple nicks and scratches won’t result in some ugly silver highlights.