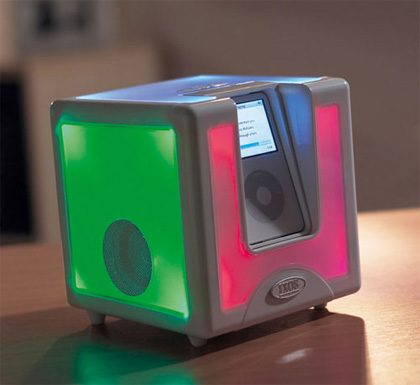 Boogie Wonderland is back. Whether that’s good or bad is up to you.

The latest in the return of the Rotating Ceiling Silver Ball culture is the Ixos Disco Cube, a set of speakers and subwoofer for your iPod. Just plunk that bad boy down into the cube and you can have your tunes blasting faster than you can say bell bottom jeans.

The Cube doubles as a dock, so it won’t wear out your battery as you’re dancing the night away. It works with other MP3 players, too, as long as you use the right cord.

Disco wouldn’t be disco without flashing lights, and the Ixos Dosco Cube has that, too. Fortunately for the non-disco crowd among your friends, the Cube has an Illumination Off switch, so you won’t go blinding anyone who doesn’t want to be blinded. Those lights, by the way, flash in time with the groove of your tunes, which is more than that silver ball on the ceiling ever did.