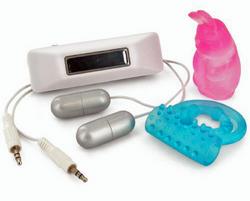 The legal team over at Apple are going after the makers of the iBuzz, the musical sex toy that works its magic to the beat of whatever tunes it happens to be playing. But it’s not necessarily the toys themselves that have the folks at Field Fisher Waterhouse (Apple’s legal arm) hot and bothered. No, they are in a lather about the iBuzz ads, which echo Apple’s famous “Silhouette” ad campaign. Seems the technical language of the letter delivered to Maker Love Labs was more concerned with the reputation being damaged by the ads than the devices.

Looking for a further chuckle? Here you go: The company doesn’t even use the ads anymore. iBuzz 2 is all the rage now, and new ads are promoting the new product. After the next few weeks, when this controversy dies down, you’ll have to work really hard to see those original ads again. From our point of view, Apple has given the iBuzz one last spasmodic publicity push.