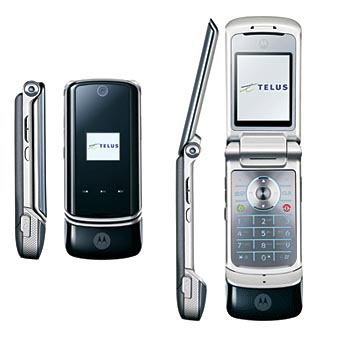 Telus Mobility is adding more Motorola love to the party this holiday season, announcing the availability of the Motorola KRZR K1m. Verizon Wireless already has it, but now Canadians can enjoy the RAZR’s successor too (just as Telus followed in Verizon’s footsteps with the LG Chocolate Phone).

In fact, the Telus edition looks much like the Verizon counterpart, boasting a black and silver motif (rather than the blue). The features are nearly identical as well, with the inclusion of a 1.3 megapixel camera with 8x zoom, EV-DO high-speed connectivity, integrated MP3 player with external “touch sensitive” music controls, Bluetooth, and microSD expansion.

As you’d probably expect, the MOTOKRZR K1m for Canadians is also capable of picking up XM Satellite Radio via Telus mobile radio. The asking price is $200 with a three-year contract or $400 on its own.