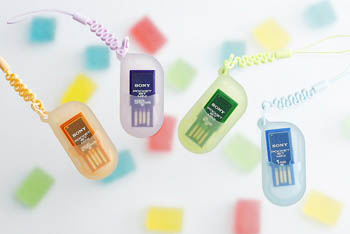 Those little Sony Pocket Minis we heard about last month, well Sony plans to put a new spin on these suckers by pre-loading them with content. The Sony Pocket Bit Mini will still come in the 256MB, 512MB, 1GB, and 2GB sizes, but with Sony pushed wares tacked on; music, videos, and other kinds of material that we can’t tell you about right now.

Sony says these are the future of portable storage, that CDs and DVDs will be a thing of the past (BlueRay too?), and that these will be left behind in the next great leap forward in technology.

I’m surprised they bit the bullet so soon. If you’re thinking you’ve seen this before, you have, many times now. Some of those preloaded USB drives have had games on them. Perhaps Sony could put PS3 games on these Pocket Bit Minis. Talk about killing two birds with one stone.

They will come in four fun colors, but only in Japan to start. They’re available now, and the puniest one can be had for 2700 yen (US$23).