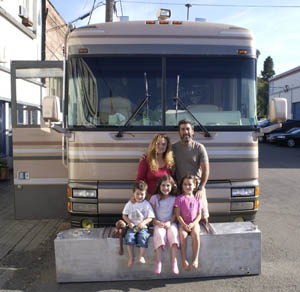 There’s spending money to save money, but this is ridiculous. And what about the smell? Wouldn’t it drive you crazy after awhile?

Well, they’re not saying that, but the Adler family is saying that they enjoyed the challenge of a cross-country trip in a monster RV powered byâ€”vegetable oil. That’s what they’re saying publicly. We’re sure that they will never eat fast food again.

Frybrid, the folks who specialize in jerry-rigging vehicles so that they can burn the runoff from McDonald’s and KFC and all of those other fast food joints, helped get the big old monster of a motor home in shape for the journey. The 21-ton vehicle was 40 feet long and had plenty of space for the family of five to luxuriate in during their 78-day journey. That meant, of course, that the vehicle needed lots of fuel.

So, they stopped at various purveyors of fine food and gassed up, as it were. They still had to nourish themselves, however, and various delays kept them on the road for far longer than the three weeks that they had optimistically planned. They ran through all of their money, maxed out the only credit cards they had, and had to resort to petty theft to finish their grueling ordeal. Yes, 6-year-old Julia had to give up her tooth fairy money to pay the last of the Adler Family Journey highway tolls.