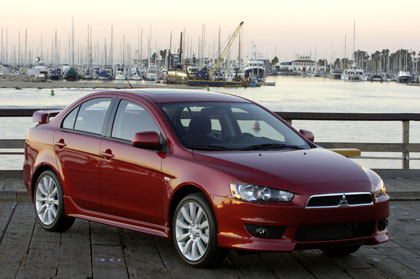 Granted, it’s no Evo X, but it could mean that we are that much closer to the new rally champion. Mitsubishi Motors has finally announced the all-new 2008 Lancer sports sedan and they’ll be showcasing the new “driven-to-thrill” vehicle at the North American International Auto Show next month in Detroit.

To be available at dealerships sometime in early 2007, the new Lancer borrows much of its styling from the previously revealted Concept X. Probably the most prominent feature is the “shark-nosed front end inspired by jet fighter air intakes.” Under the hood, you’ll find a 2.0L MIVEC four-banger good for 152hp (143hp in California). The 5-speed manual gearbox comes standard, but if you want to be a little different, then you can opt for a continuously variable transmission (CVT). This is the first time a CVT has been offered in a Mitsu in North America.

The 2008 Mitsubishi Lancer will be offered in three trim levels — DE, ES, and GTS — the last of which is the most performanced-geared of them all. In fact, if you get CVT-equipped GTS, you can enjoy a “6-step Sportronic mode using magnesium steering wheel paddle shifters.”