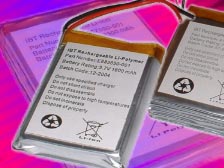 Lithium polymer is being dubbed as the next big thing in notebook batteries. The same stuff that powered the Mitsubishi Pedion notebook about a decade ago, has stuck around in some designers’ minds all these years.

Fast forward to 2006 and they’re trying again. Stan Glasgow, president of Sony Electronics, has been quoted as saying that lithium polymer stands a great chance of making a roaring comeback sometime in the not-too-distant future. Let’s hope for Sony’s sake, and our tender little laps, that is all it causes to roar.

Despite the recent troubles associated with lithium-ion batteries, they’re still wildly popular. The companies that have ordered mass recalls of the ones that could catch on fire are simply replacing those hazardous ones with other batteries made of the same stuff, with the promise that they’ve been rigorously tested. A couple companies have gone off on a serious tangent and started making zinc-based and even fuel cell batteries. Add to that the polymer-based batteries’ inability to hold as much battery life as their ion cousins, and you have many observers greeting Glasgow’s comments with a shrug.

What’s the difference between the two? Lithium-ion batteries have all that lithium packed into a cell. Lithium polymer, on the other hand, has the energy source encased in a gel, which makes it virtually impossible to catch fire. That design, however, can’t promise the kind of battery life that the lithium-ion cell can.

The densely packed design of our favorite lithium-ion batteries makes them popular because of their power and long life, but it also makes them prime candidates for sparks and blazes and things like that, even in so-called “safe” models. The tighter the design, the more of a risk we take, and that’s not going to change anytime soon.

Many phones and other mobile devices, as science would have it, now employ lithium polymers. It’s probably not a stretch to imagine the technology finding its way into the bowels of notebooks again, like the return of the Ghost of Christmas Past. The more laptop fires we hear about, the more folks are going to get onboard the polymer bandwagon—again.