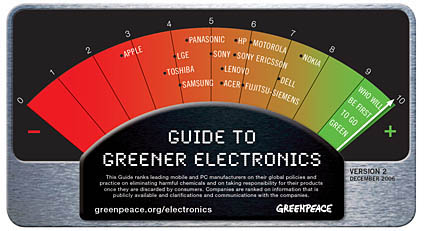 “It’s not easy being green.”

Kermit the Frog or Steve Jobs? Here’s a hint: One of them is on the Greenpeace Enemies of the Environment list.

That’s right, Apple Computer, which brings you more iPods per year than there are people who can truly afford them, is in the total doghouse with Greenpeace, which says that the Fruit folks do next to nothing to curtail its electronic waste.

The environment preservation organization likes to do things by the numbers. In addition to trying to save the whales and prevent nuclear testing, they recently ranked a large handful of electronics companies according to a series of earth-friendly criteria. On a scale of 1 to 10, Apple came in at 2.7.

Leading the way were Nokia and Dell, which exceeded 7. Motorola and Fujitsu were just over a 6 on the Guide to Greener Electronics. Not far behind were HP, Sony Ericsson, Lenovo, and Sony.

And way down in the red zone was Apple, which avoided a 0 only by pursing “responsible recycling.” Greenpeace is really taking it to the “We’re Not Windows” company, launching a Green My Apple campaign in order to motivate consumers to give Apple a piece of their minds.