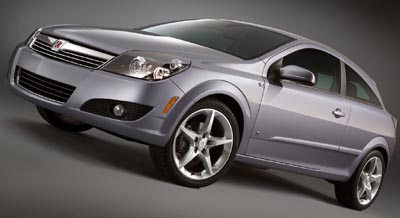 Let the repackaging begin…er, re-commence! General Motors is adding another vehicle to its Saturn lineup, unveiling the 2008 Astra compact car. The Saturn Astra is based on an Opel vehicle of the same name, and it will start hitting North American showrooms late next year. This Opel-Saturn relationship is nothing new, as we’ve already seen distinct similarities between the Pontiac Solstice, Saturn Sky, and the upcoming Opel GT.

As it was derived from a vehicle originally intended for the European market, it only makes sense that the Saturn Astra comes with “European styling and driving dynamics,” as Saturn GM Jill Lajdziak put it. The compact people-mover will be “nearly identical” to the 2007.5 Opel Astra, and will be sold in three-door and five-door configurations. No word on pricing, but they’ll be unveiling the Canada and United States-friendly Saturn Astra at the Chicago Auto Show in February.