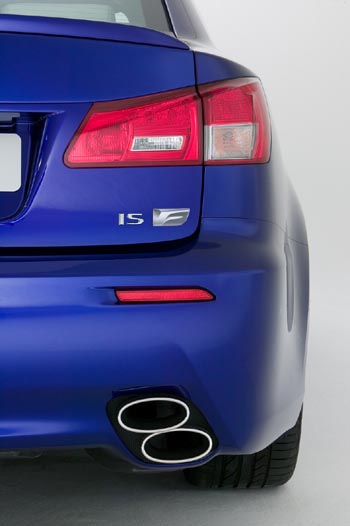 Oh , Toyota, why do you have to be such a tease? Japan’s largest automaker has just issued a set of teaser pictures for their latest project, the performance-oriented 2008 Lexus IS-F. The garden variety Lexus IS (available in 250 and 350 variants) has been quite a hit for Toyota, but consumers are demanding an even sportier feel to the luxury sedan. The result is the IS-F (we think the F stands for “Formula”, paying homage to Toyota’s F1 heritage).

Other than that funky “F” badget on the back, the most notable feature that we can notice is the “stacked exhaust” design wherein the exhaust pipes are one on top of the other. They’re only showing us one side of the car, but wouldn’t it be total awesomeness to see this in a quad-tailpipe configuration? They might need that extra breathing room anyways, considering that this car will get a “substantial boost in power from a V8 powerplant.”

We’re unsure whether this is going to be an IS coupe, related to the LF-A/H supercar concept, or something entirely new. What we do know is that they’ll be showcasing the vehicle in Detroit next month at the North American International Auto Show.