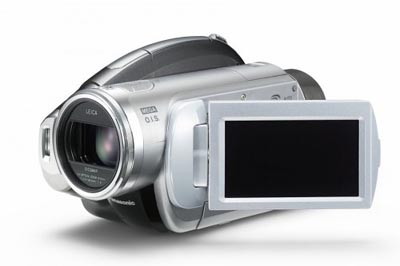 Recording family movies just got more definitive. Panasonic today announced a couple of new additions to their camcorder line, both of which will joyously record life’s precious moments in high definition. The HDC-SD1 and HDC-DX1, based on the spec sheet, are very similar, but with one notable difference. The former — the lighter (430 grams vs. 680 grams) and more compact of the two — records most of its goodness on SD and SDHC memory cards, whereas the latter does its thing on blank DVDs. You’ll get about 1 hour of HD video onto a 4GB SDHC card, whereas you’ll only get about 40 minutes on a dual-layer DVD-R disc.

As far as features, they’re both capable of the high-resolution AVCHD format, pack Panasonic’s optical image stabilizer, and record in beautiful 5.1-channel surround sound. Optical zoom is rated at 12x, whereas digital is 30/120x. You can also take JPEG stills in 16:9 aspect (1920 x 1080 pixels). Both camcorders are expected to ship in March, with the HDC-SD1 and HDC-DX1 getting priced at $1500 and $1400, respectively.