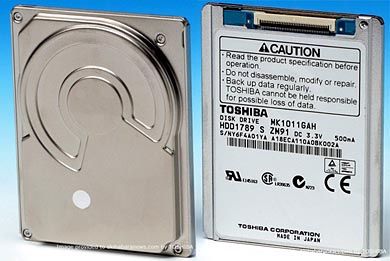 In another momentous milestone, Toshiba has created a 1.8-inch 100GB hard drive designed for mobile devices. Could this be the storage solution of choice for the next iPod? Well, According to Charlie White of Gizmodo, “Toshiba was careful not to mention anything about its relationship with Apple,” but it is well within the realm of reason to believe that the next-gen iPod Video (possibly unveiled around the same time as the much-talked-about iPhone) will be rocking this 100GB hard drive.

As far as tech specs, we know that it spins round and round at 4200rpm, but we have no idea how much Toshiba would be charging when they start selling these to device makers.