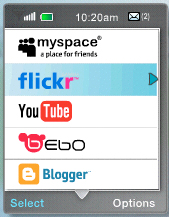 OZ, one of the hot new mobile messaging providers, is expanding already, unveiling a social networking product that brings together the Net’s most popular sites under one mobile banner.

It’s called the OZ Mobile Social Networking Solution. Their software will allow you to have your favorite networking sites appear on your mobile, with super-easy switching and accessing. Especially if you have a camera in your phone (and who doesn’t these days?), you can be out and about, take a still shot or a video, and upload it to your MySpace page with a few clicks.

This sort of thing is being done already, to a certain extent, but the news here is that OZ has mobile messaging capabilities deals already in place with Cingular, Sprint, and T-Mobile and that such deals certainly stand to be expanded to include this new product, as early as next spring.