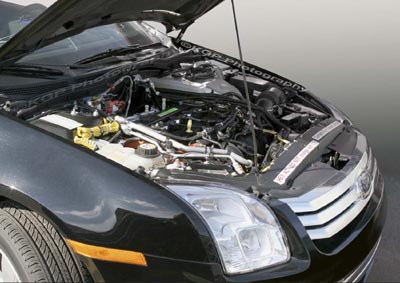 It’s fine when you just have a brilliant idea, but it’s another thing altogether when we find out whether you can actually implement that idea in a way that really works. The Ford Fusion Hybrid, as a prototype, has started making its rounds, getting tested left and right so that the the blue oval of a company can iron out any kinks before shipping it to market.

Ford isn’t even being shy about this new development, because the Fusion Hybrid was spotted in a parking lot that was once used for testing the Escape Hybrid. This parking lot, in fact, is full of Fusions. Plain to see under an open hood was a label by the engine reading: “HEVAC – DO NOT charge with Oil.” HEV = Hybrid Electric Vehicle.

From what we can tell, the prototype was running on a 2.3L DOHC four-banger, the same as the Escape Hybrid. Combining the 94hp with the 133 gasoline engine, it is said to provide the same amount of power as a 200hp V6.