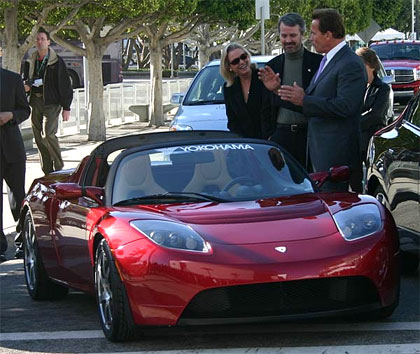 Tesla is branching out, already.

The company, which made a big splash on the automotive scene earlier this year with the all-electric Roadster, is looking to license part of their technology as well as continue plans for a sedan.

The iconic company is in talks with companies to license its lithium-ion battery pack technology. That battery consists of 6,381 cells that give the vehicle speed, power, and an estimated life service of 100,000 miles.

The as yet-unnamed sedan will have four doors and look something like a BMW 5-Series, with the motor in the front and power coursing through the body of the car and into the rear wheels. We now know that two models will be available, a 200-mile version and a 300-mile one. The company has set an ambitious goal of selling 10,000 to 20,000 of just the sedans. Given the rousing success of the Roadster, that goal might not be excessive.