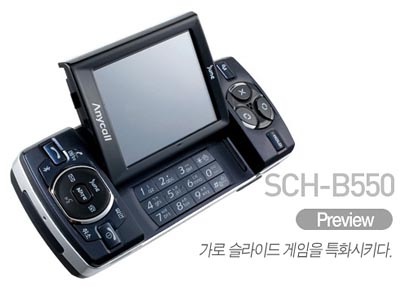 Do you remember the Pantech IM-U140 we caught a few months back? That landscape-oriented handset sure looked a lot like a Sidekick, and now it seems that Korea’s largest cell phone maker wants a piece of this pie too. In what may appear to be a total shocker, Samsung isn’t directly targetting a slim benchmark today, instead offering a gamer-centric phone in the newly announced SCH-B550.

Held horizontally, the large color screen apparently slides upwards to reveal the numpad, but many of the key buttons are found on either side of the display. These must also be used for all those mobile games you’ll be playing. As is par for the course for Korea-bound phones, the SCH-B550 also boasts DMB mobile TV.

Rounding out the specs are 3D graphics, TV output, integrated MP3 player, Bluetooth, and a 2 megapixel camera. No word on pricing, but yes, Korea-only.