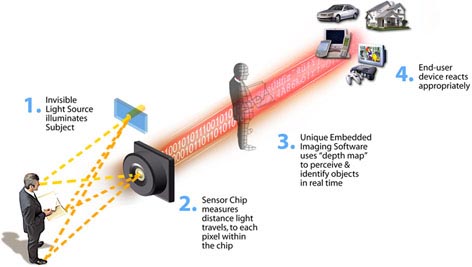 You really want your car to be smarter than you. And we’re talking gadgets here, but not of the James Bond variety. No, we mean cameras and lots of ’em.

We already have vehicles that can warn us when we’re about to hit the garage wall or the curb or—even worse—a person. Luxury car makers now have night vision assist systems. That’s all well and good and yesterday’s news. What we want now is car cameras that can do all sorts of new and wonderful things, like tell us how fast we’re going based on infrared light.

Yes, that’s just one of the new technologies being pursued in the world of CMOS chips, the very technology that drives so much of today’s digital imaging. A company out of California called Canesta can predict the speed of a vehicle by tracking the time it takes invisible light to travel from the car to an object and back again. Not that you’d need to do that on a daily basis, but you could.

The company’s big break in automotive camera technology is likely to come next year, when Honda begins installing Canesta 3D cameras to determine the size of automotive passengers and deploy airbags accordingly. That’s the sort of depth perception that CMOS advocates are after.

The same sort of 3D camera could be used to alert drivers to all sorts of unusual occurrences, such as sudden slowdowns in traffic, sudden bursts in vehicle speed, and abrupt departures from your current lane (although this might get annoying if you’re one of those drivers who likes to zoom around the grandmother drivers of the world).

The cameras can also be trained to focus on blind spots, giving drivers much more peace of mind when driving in heavy traffic. More importantly, cameras can be hooked into sensors that warn of an impending collision by sending lightning-quick signals to the brakes and airbag systems to be ready for impact.

It’s not just Canesta, either. Other pursuers in this market include Mobileye of the U.S. and International Electronics & Engineering of Germany. They’re all after the same thing in the end, increasing what we and our vehicles can see and do when we’re on the road.