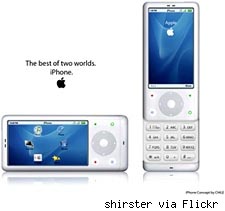 Looks like the oddsmakers might have to adjust their betting lines just a touch after this announcement. Kevin Rose, better known as the father of Digg.com, has confirmed a whole slew of details surrounding the yet unannounced iPhone. Remember, this was the guy that was on the money about the new nano too.

According to his recent podcast, the iPhone — image provided is probably a fanboy’s mockup, so expect some Jobsian changes — will sport an “extremely small form factor” (though not impossibly small like the new shuffle), a dual battery design (one for music, the other for phone functions), a slide-out keyboard, and the possibility of a touchscreen. He goes on to say that it will be offered in two flash memory-based variants: a 4GB and 8GB for $249 and $449, respectively.

As far as who’ll be around for launch, Rose was that it will likely be with a singular (Cingular?) GSM carrier, with the rest of the crew (both CDMA and GSM) following suit later on. Of course, we won’t know any of this for sure until his Royal Steveness hits the stage.