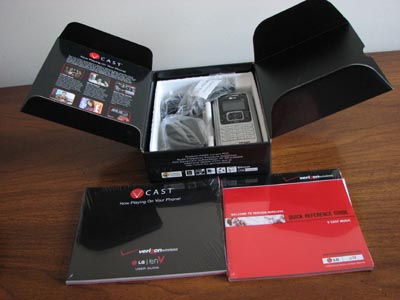 Make no mistake. The LG VX9900 enV from Verizon Wireless isn’t going to steal any market share away from the BlackBerry, but it is quite the formidable alternative to the ubiquitous Sidekick 3 from T-Mobile. The enV is the latest in a line of mobile communicator devices from LG Electronics, following in the tradition of the sliding 9100 and 9200, and more recently, in the horizontal clamshell-shaped LG VX9800 (also known simply as “The V” from Verizon Wireless). In fact, on a purely cosmetic level, there isn’t all that much that separates the 9800 from the 9900: It still has the standard “candybar”-like appearance in its closed position, offering you a fairly garden variety experience when it comes to voice calls, and it still flips open from the right side to reveal a landscape-oriented color display, QWERTY keyboard, and stereo speakers. In this way, the LG VX9900 enV isn’t so much a “new” phone as it is an “upgrade.” In case you missed our first hands-on video, you can check that out here.

Text before voice
With its fairly well designed QWERTY keyboard, it’s clear that the enV is designed with the text message enthusiast in mind. The keys are a reasonable size for a thumb-board and there’s enough spacing between them to avoid mistypes. Unlike a computer keyboard, however, there is no space “bar” on the bottom. Instead, there is a pair of space “keys” located on the bottom right and bottom left hand corners. Real estate is at a premium on a device like this and little details go a long way. Speaking of which, you’ll find that the LG enV is larger than the average standalone cell phone, but it is certainly more compact than a business-oriented PDA phone or smartphone, like a Motorola Q, Samsung BlackJack, or the like. It even boasts Wireless Sync Email from Verizon, giving you a mobile email solution that is easily pocketable. 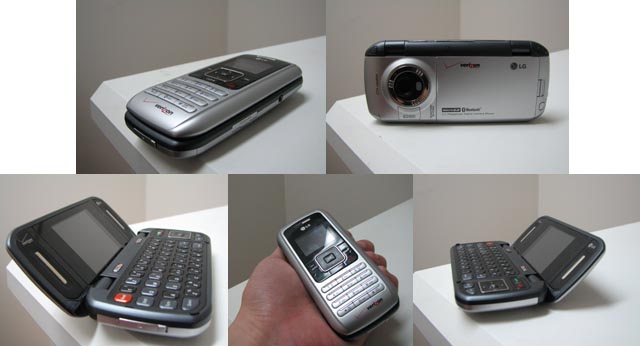 I found the cheesy (no pun intended) shutter sounds to be pretty cute at first (they use a little child’s voice), but after a while, it just got annoying so I turned it off. I like how I can adjust the white balance and how there is autofocus, but the delay caused by the auto focus process just made it not “worth it” to use, especially for random candid pictures. Photo and video quality are quite good, but the flash made for some rather strange colors (very bluish). For a couple of sample pictures, check out Beyond the Rhetoric.

V CAST, Music, and more
Bear in mind that Verizon Wireless isn’t so much trying to sell you on the phone itself as what they have it capable of, most notably, V CAST everything. You can use this phone to get music, ringtones, wallpapers, games, applications, and a whole whack of other cool stuff through Verizon’s service. I enjoyed the music player: it may lack in the deep bass department (as expected), but the speakers are surprisingly loud and the sound quality is quite crisp. What is a shame, however, is that you can’t seem to organize your own music folders. You must stash all of your MP3 and WMA files into a single folder (my_music) on your microSD card. These cards are readily available in capacities as large as 2GB and, well, it’s not exactly practical to be looking at 400 songs at a time. That said, you can search by album name, song, artist, and genre, and you can set up your own playlists. Here’s a quick look at the camera and music player:

Design Impressions
While in its closed position, I would have to say that this phone isn’t much of a looker. It’s got the standard cell phone silver, a little bit of black here and there, and the odd chrome bezel for good measure. The outside display is squintingly small, but I guess it serves it purpose well enough as a temporary exterior screen for caller ID, voice calls, and so on. The back of the phone is just as meh-worthy: the camera is right in your face, and there isn’t a battery cover. Instead, the battery is right in the back (so you better hope you don’t accidentally pop it off). You can make use of most of the phone’s functions while it is closed, but you will want to open it. The inside of the phone is quite the different story. Instead of the rather unsightly speakers on the LG 9800 (“The V”), the enV’s speakers are much sleeker, mostly blending into the casing with the exception of a couple of simple, yet classy chrome strips. I’m almost tempted to say that the design of the open 9900 enV is “sexy.” I’m torn, because it seems that this cell phone is Beauty and the Beast, all rolled up into one. Here’s a look at the menu system:

Conclusion
On the plus side, the LG VX-9900 enV from Verizon Wireless is an excellent mobile communicator with its not overly huge form factor, well designed QWERTY keyboard, and landscape-oriented interior color display. The speakers are loud, the camera works quite well, and the slick design of the inside is pretty darn sexy. On the downside, the exterior design begs for a makeover, the flash is pretty much useless, and the displays are too small. In a future iteration (9950? 10000?), I would like to see a larger 16:9 widescreen on the inside, a more usable flash for the camera, and an exterior redesign. The LG enV, an alternative to the T-Mobile Sidekick worth considering, is available now from Verizon Wireless for $150 with a 2-year contract.