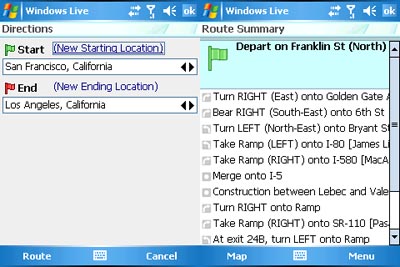 The editors at Gizmodo had the chance to play with the newly released Windows Live Search for Mobile and compared it against the current benchmark, Google Maps Mobile. After putting the new mapping and direction-giving tool, they decide that the hands-down winner is Microsoft.

They’re quick to mention, though, that it may not all be because of the app itself. You see, Google Maps runs on Java and Java only, and so it “ran like Java always does. Painfully.” By contract, Windows Live Search is available in either Java or WinMo flavors, the latter of which had a more “native-app” feel.

They say that WLS “looked smoother, scrolled faster, and zoomed in and out much better.” Gizmodo also notes that the turn-by-turn directions are more usable than Google Maps’ “buggy Java implementation.” The WLS business finder works quite well too.