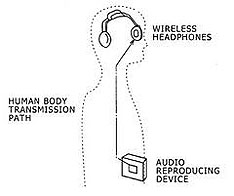 Such is the case with a new concept allegedly from Sony for a body-wired set of headphones. According to a recent report, Sony’s concept incorporates your very body as a capacitor for your tunes. The idea is to eliminate both the wires on your headphones and the disruption that current wireless ‘phones suffer from occasionally.

But what happens if you turn the volume all the way up while you are busting out a big sweat at the gym? Will you short-circuit?

We just don’t know. No other details are available, which makes me wonder whether this isn’t something that “wasn’t supposed to get out yet.” I’m all for wireless, but I’m not sure I want my music coursing through every fiber of my being. Then again …