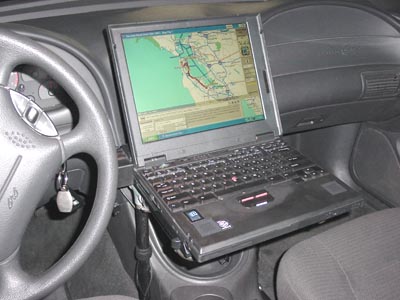 Researchers at Sarnoff claim to have developed a GPS system that won’t get blocked by tall buildings.

Prototype technology developed at the Princeton, N.J., company goes a long way toward eliminating so-called “GPS-denied environments” by filling in those GPS gaps using super high-tech processing of stereo video images. The result is a system that can hold on to location accuracy to within one meter for a full half kilometer.

How do they do it? Well, they cheat, but just a bit. They use four cameras, two facing forward and two facing backward. (Reminds you of that invisibility cloak, doesn’t it?) Anyway, the system goes to work when the GPS flashes out, making lightning-speed heavy-duty calculations from the 2-D cameras in order to come up with a 3-D location fix.

We’re not done, though. The system then compares the data to known fixed objects, filtering those out in a process called “visual odometry” and producing a seamless transition from GPS darkness to light. All of this happens in the blink of an eye, which is to say that you probably won’t notice anything out of whack.

The folks at Sarnoff have tested their ideas in highly populated areas and have pronounced the prototype workable and usable. When it will see the light of day within the bowels of today’s GPS machines remains to be seen.