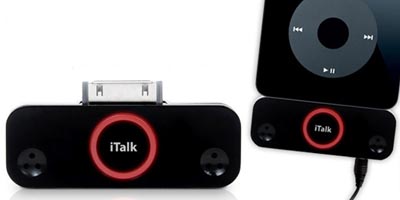 An update of the popular iTalk, this version gives you two microphones, one on either side of the device, so you can record in stereo. Plug in your headphones to the underside of the device and you can listen in stereo as well.

Not much more to say about this, really, except that you can adjust the recording volume yourself and, if you really want to, switch back to mono recording, just for old times’ sake. Oh, yeah, you can plug another mic into the iTalk Pro if you want to extend its capabilities.

Many people believe that two mics are better than one. At US $49.99 it’s worth a shot.