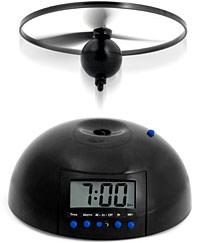 This really looks like one of those carnival hats with the propeller on top. But it’s kind of cool as well as a concept.

It is the aptly named Flying Alarm Clock, and it has two parts; the base is the clock, which has an LED display, alarm, and other sorts of things that you’d expect from a basic timepiece. But it’s the top that will get all the attention. When the alarm goes off, the top separates from the base and begins flying around the room. The best part (or worst, depending on your point of view) is that the top won’t stop spinning until you catch it and put it back in the base. The sound the alarm makes is supposed to be annoying, but it might be drowned out by a spinning propeller landing on your face.

I wouldn’t mind having one of these around the house. It would certainly be a conversation piece, and I would probably set it off just to amaze my family and friends, but I rather like peaceful awakenings.

The Flying Alarm Clock is just under US$40.