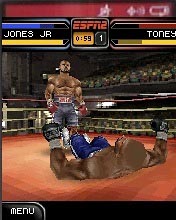 Maybe it’s just me, but boxing doesn’t seem quite as popular these days as it did several years ago. That said, boxing video games are as popular as ever (Wii Sports: Boxing is a blast; try punching your sister’s lights out and getting points for it to see what I mean). Fight Night Round 3 is already an established hit on several home video game consoles, but now you can take the ring with you on the road with the mobile phone version.

Available through most wireless carriers, Fight Night Round 3 is said to boast “all the ingredients of a world-class mobile game – beautiful graphics, one-handed and intuitive gameplay, and the pick-up-and-play quality that mobile gamers love.” You even get world famous pugilists like Oscar de la Hoya and Roy Jones Jr.