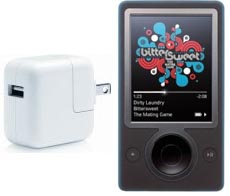 Earlier, we reported that the Zune had, in just a short time, become the second biggest-selling MP3 player. But that second is a distant second, according to one large source.

Amazon.com, the giant online purveyor of just about everything on earth, says that iPod chargers sell better than Zune. We won’t even begin to talk about the sales disparity between the Zune and the iPod itself.

That is to be expected, of course, since Zune has just come on the market and has some tremendous hurdles to overcome if its manufacturer hopes to truly compete with Apple’s iPod and its many incarnations. Still, this latest piece of data is good for a chuckle, especially since we’re fairly certain that Bill Gates expected a much bigger bang when Zune finally hit store shelves.