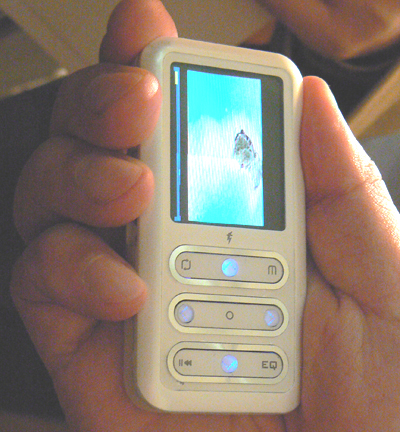 You sure wouldn’t want to grab this one by mistake as you’re heading out the door with music jamming in mind. With the sheer preponderance of media players out there, it’s hard to believe that we can have one that doesn’t play MP3s. But that’s the case with a new media player called Wizpy, from Turbolinux.

Did you catch the last five letters of the company name? That would be Linux, the beloved open-source operating system favored by those who want an alternative to Windows in the PC world. The Wizpy will contain Linux boot software, allowing you to plug into the USB port of any PC and begin running your favorite OS.

The Wizpy latches onto the computer’s main memory to jump-start it, but that’s where the connection ends. The remainder of your PC experience is 100 percent Linux.

The Wizpy is a flash memory portable media player that does have some form of audio. It’s just radio, though. You can, however, use it as a recorder.

It will be available in February in Japan, with a price tag that approximates US$250.