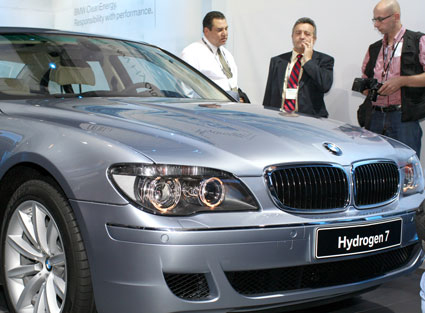 Liquid hydrogen is the fuel that BMW says will help power its luxury sedan, the Hydrogen 7 – a newly unveiled hybrid that takes one touch of a button to switch to gas power. You’ll need both engines, of course, because the hydrogen alone won’t get you very far.

The Hydrogen 7 had its coming-out party at the L.A. Auto Show. The company’s details included a 12-cylinder liquid hydrogen engine powered by 260 horsepower that can rev up to 62.1 mph in 9.5 seconds and ultimately reach a top speed of 143 mph. You can go for 125 miles before needing more fuel. That more traditional gas-powered engine is a 438-horsepower 760i, something more familiar to BMW enthusiasts.

Despite all the hype, the vehicle has some “features” that you should definitely know about. First of all, that cool-sound elixir, liquid hydrogen, has to be used within a week or it will get together with the oxygen in the air and poof!—evaporate.

Secondly, you’ll have to work very hard to find a hydrogen fueling station. We just aren’t there yet as a global society. Mobile filling stations can be had, for a pretty penny. So you’re looking at some serious expenses just to keep using the new functionality.

But maybe you don’t have to worry about any of this, since BMW says, whether they realize it or not, that this is just a concept car. The company is planning to make only a large handful of the current model, which it will personally hand-deliver to lucky folks like celebrities, who really can afford the Hydrogen 7.