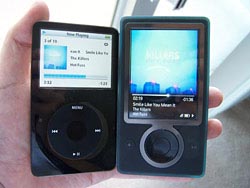 The Zune is Microsoft’s freshman foray into the world of portable media players, and while it isn’t quite an iPod killer yet, it has certainly done reasonably well for itself. According to recent sales figures from giant e-commerce site Amazon, the Zune is now the number two best selling personal media player, lagging only behind the ubiquitous iPod.

What this means is that it has leapfrogged all the other competition, ousting semi-prominent figures like the Sandisk Sansa line, offerings from Creative, and other formidable options. It’s not completely clear where the Zune sales are coming from, but it appears that people that want an iPod, still want an iPod. That said, those who don’t want to jump on the Apple bandwagon with a new shuffle or nano are opting for the Microsoft Zune over other alternatives.

Will Microsoft be able to maintain a steady forward pace with the next-gen Zune (can’t believe we’re already talking about that)? We’ll just have to wait and see.