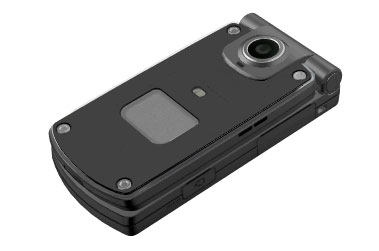 They’ve gotten beyond the concept stage, but a couple of new 802.11b/g WiFi-equipped cell phones developed by Panasonic are still in the “prototype” stage. From what I can gather, both handsets will boast a similar feature set, and what a feature set it is.

To be exhibited at ITU Telecom World 2006 in Hong Kong next month, these innovative mobile phones can make use of an on-board WLAN module to provide high quality IP TV, not only streaming fun multimedia via the DLNA (Digital Living Network Alliance) function, but also performing video calls over an internet connection.

The voice quality is said to be “high”, and the video is shown back at a very reasonable 30fps. If your home electronics are DLNA-compliant, you can even use these phones to wirelessly control products “such as TV or PC.”

Panasonic informed us earlier this afternoon that the developed prototype was created using a FOMA P902i, so the design of the prototype is the same as that of the P902i shown. Things may change when a production model is ready mid 2007.