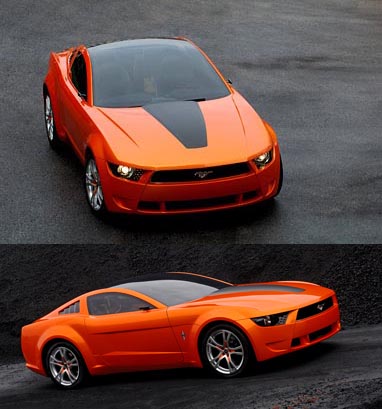 Enough with the spy shots and “caught in the wild” posts. We caught a glimpse of the Ford Mustang Guigiaro concept less than two weeks ago, and now the hyped-up pony car is finally making its official introduction.

Ford has just revealed the innovative yet somewhat retro-looking Mustang Giugiaro concept, boasting Dynamic-tuned dampers, lowered springs, and yes, even guillotine doors. Powering the monstrous pony car is a supercharged 4.6L 3-valve V8 good for 500hp. There’s plenty of rubber on the road, thanks to the 20-inch wheels mated with 275mm and 315mm tires in the front and rear, respectively. Naturally, they’ve jazzed up the interior too.

They have not announced a production version, but this is said to be a sign as to how the garden variety 2010 Mustang will look.