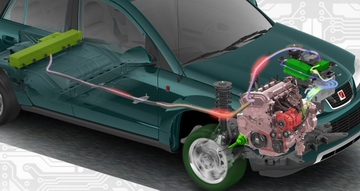 Earlier, we told you that plug-in electric cars might be just around the corner. Now we have just caught wind of GM’s announcement of a plug-in SUV, and it doesn’t smell pretty.

A report out of the L.A. Auto Show that General Motors CEO Rick Wagoner is promising a Saturn Vue plug-in hybrid setup. That’s certainly big news on the green vehicle front, since you wouldn’t normally put the words SUV and plug-in together in the same sentence, but think again.

So far GM claims that the eventual vehicle will get twice the fuel efficiency of any SUV running today, and that it will be put together using a fresh take on the blueprints of the company’s existing lithium ion battery hybrid system. This is planned for 2010, and i’m sure we all hoped for a much better fuel efficiency in vehicles by that time.

The value of having a plug-in is only relevent to the capacity of the battery pack. GM is saying 10 miles range on electric propulsion before the gasoline engine kicks in, to call this an electric plug-in vehicle is dissapointing. GM had it right with the EV1, now they are setting themselves back over 90% in efficiency.

You can recharge the battery by braking for traffic, of course.