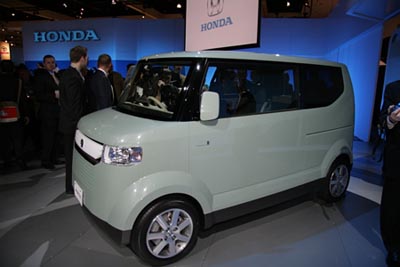 Well, this certainly brings a whole new meaning to the world “econobox.” Revealed at the LA Auto Show this week was the Honda Step Bus, a compact car with plenty of interior space. Drawing on the same philosophy as kei cars in the Japan, they’ve managed to keep the Step Bus as small as it can be from the outside, while exploiting its interior space for maximum efficiency.

The styling is clearly reminiscent of the Scion xB, and the convertible seating configuration is much like the Honda Fit. You get two captain seats in the front and a bench in the rear, all of which can be moved around to your liking. They’ve haven’t announced any specifics regarding power other than the engine will be mid-mounted as “small displacement.”

More more pics (both live and rendered) of the micro mini Honda Step Bus, check out the Read link below.