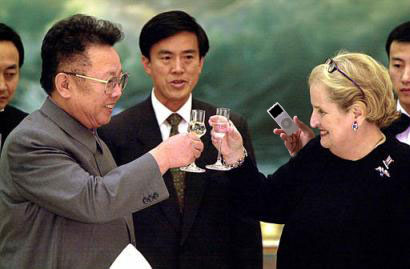 Talk about a meaningless gesture. The U.S. Government is seeking to punish North Korea by making it much tougher for that country to buy popular American products like iPods, plasma TVs, musical instruments, and Segway scooters.

Who comes up with these ideas? Better yet, who thinks it’s a good idea? The U.S. is certainly not the only market for such things. North Korea is right next door to, I don’t know, South Korea and Japan, not to mention fully able to log onto the Internet and place orders galore.

Yet here is the USG trying to make a statement. Why bother? It’s supposed to be an effort to punish North Korea for allegedly developing a nuclear bomb capacity, but it certainly won’t do anything other than give North Korean leader Kim Jong Il a good laugh. He certainly likes his liquor, as is well known, and he certainly has an appetite for Western luxury goods. But we can’t imagine that this measure isn’t going to stop him from appreciating—or attaining—such items.

Among the other “luxury items” on the list of sanctions are Rolex watches, cognac, cigarettes, artwork, and Harley Davidson motorcycles. But wait: It gets better. This is really a long-distance, world leader smackdown aimed at Kim Jong Il. See, Kim is a big basketball fan, but this list of sanctions bans sports equipment. Kim has quite a collection of American sports memorabilia, including a ball signed by Michael Jordan.

The spat even extends to Kim’s spouse, who studied piano. The sanctions ban the import of musical instruments.

All of these items are, of course, expensive and so couldn’t be afforded by much of the country. Unlike the Iraqi sanctions of a decade ago, which hurt the common people much more than the government, these sanctions are aimed squarely at the leader of the country.