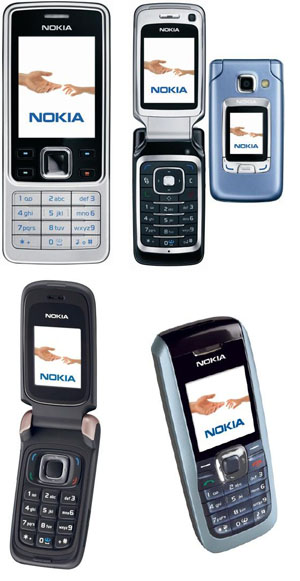 Nokia continues to pump out mobile phones, so much so that they begin to all look alike after awhile. Four new models announced today do next to nothing to dispel that notion. Here are the details all the same:

The 6300 is notable for its 2-megapixel camera and 8x digital zoom. The bigger and more important numbers are 1280×960 and 176×144; that’s the resolution of still and video, respectively. Voice dialing, Bluetooth, MP3 player, FM radio, and USB syncing round out the requisite features. Pricing is expected at US$330.

The 6290 is a clamshell smartphone that runs on Symbian OS, email, MMS, and Office functionality, MP3 playability, and two-way video calling. The digital zoom isn’t all that flash, at just 4x, but this is more of a business phone anyway, as evidenced by its GPRS, EGPRS, and WCDMA capabilities. Expect to pay about US$425 for this one.

The next clamshell is the 6086, a UMA Bluetooth-enabled quad GSM phone that also features a VGA camera and video. Expect to pay about US$263 for this model.

Last but not least is the 2626, which has a variety of functions, including MP3 ringtones and radio, instant and audio messaging, SMS and MMS, and email and a WAP browser. Nokia says that this one is for emerging markets, and the price verifies that, at US$98.

All four phones should be available in the early part of next year. You might want to write down the model numbers so you don’t get confused.