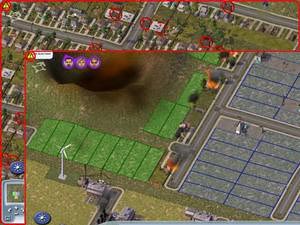 Easily one of the most recognizable video game franchises of all time, and perhaps the one that revitalized the simulation genre is Sim City. We already know that they’re taking the virtual city on the road with Sim City DS, but now we’ve caught word that Electronic Arts has released a cell phone version of the metropolitan planning game as well.

Developed by EA Mobile, this shrunken down version of Sim City literally gives you the opportunity to carry an entire society with you in your pocket. As you can probably expect from a game in this series, you are the ultimate city planner, working on residential, commercial, and industrial areas, trying to attract new residents and new business.

SimCity has been around for a solid 20 years and now it has found a new frontier in the mobile phone.