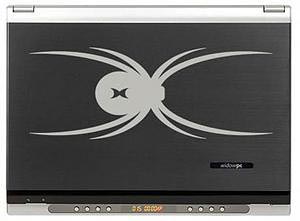 There are larger spiders out there — like the absolutely ginormous Chinese bird spider — but probably one of the most feared of the eight-legged creatures is the black widow. For a gaming laptop that will evoke fear in all our MMORPG compatriots, look no further than the Sting 517D from WidowPC.

Boasting a prominent spider logo on the cover, this portable gaming solution is one of the more powerful laptops on the market. The specs read like a World of Warcraft player’s wet dream: Intel Core 2 Duo Merom CPU, NVIDIA GeForce Go 7950 GTX graphics (one of the best in the industry), 4GB of high speed DDR2 RAM, and a more than capable 200GB hard drive. Naturally, it also boast a large display (17-inch) and plenty of connectivity (WiFi, Bluetooth, TV tuner, etc).