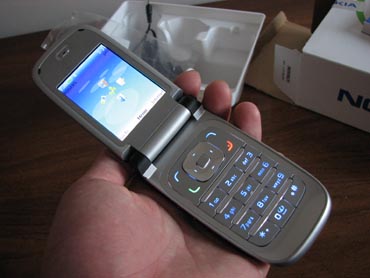 Just in time for the holiday shopping season, Rogers Wireless has announced a value-packed clamshell looking to tackle just about every possible function the average Joe may want or need. The Nokia 6133 doesn’t exactly go out on a limb on the design front, but the feature list is very formidable, especially for a phone that only costs $99 (with three-year contract). Available from T-Mobile in the USA.

When I first unpacked the Nokia 6133, I was a little disappointed to find that it came with basically no accessories. Other than the obligatory quick start guide and instruction manual, you get a wall charger and that’s about it. Upon firing it up, you are immediately treated a Rogers Wireless welcome screen. I am pleased with the phone’s weight and size — it’s quite thin (not quite RAZR slim, but skinny enough in its own right) and light (102g) — making it a very manageable portable communication device.

The exterior black casing has a slightly “soft”, almost silicone-like, feel to it, but I’m not particularly pleased with how the front looks when the phone is closed. You see, there is a silver portion of the keypad that shoots out the bottom. I would have preferred a more “all-black” look, while the chrome accents around the camera and external display are certainly acceptable.

One feature that does set the 6133 apart from its immediately available competition is the nifty button near the top that flips the phone open. While you could just as easily do the standard practice of wedging your thumbnail between the top and bottom half of the phone, pushing that button is just so much easier. The spring is incredibly powerful, surprisingly so. In fact, the phone nearly popped out of my hand the first time I tried the button. That said, when you press it, there is a loud “click” sound, which can be quite annoying if you’re on a quiet romantic dinner with the girlfriend (but I guess you shouldn’t be chatting with your football buddies when you’re on a quiet romantic dinner with the girlfriend).

Here is a quick summary of some of the key features:

While the 1.3 megapixel camera is certainly a step up from the garden variety VGA stuff you find in most other entry level phones, it certainly isn’t enough to replace your standalone picture taker. This is particularly true in less than ideal conditions. For example, when I went to the Three Days Grace and Theory of a Deadman concert last weekend, I tried taking a few pictures and videos, and let’s just say the results were less than impressive. Check out those samples at Beyond the Rhetoric.

It was handy having the camera button the right side of the phone, but what I found is that it seemed far too easy to accidentally press it when the phone was in its closed position. You can use the external color screen as a viewfinder, so there is a distinct possibility that you are previewing the inside of your pocket the whole ride to grandma’s house. As such, I highly recommend that you activate the full keyguard at an interval that you feel comfortable with (I set it at 30 seconds, but you set it at whatever you’d like, not just pre-set choices).

Rogers Wireless proudly proclaims that they have the most reliable network in Canada, boasting that they have the fewest dropped calls. In my short experience with the Nokia 6133, I never had a call drop on me, whether I was in a basement, out in the park, or waltzing through the shopping mall doing my Christmas shopping. The microphone seemed to pick up my voice fine, filtering out ambient noise no better or worse than the average phone, and the earpiece was adequate (when you turn the volume up to max, it can get pretty darn loud). I did get an “echo effect” upon occasion though, meaning that I could hear my own voice through the earpiece, but that may (or may not) have been a result of the person on the other side of the line. 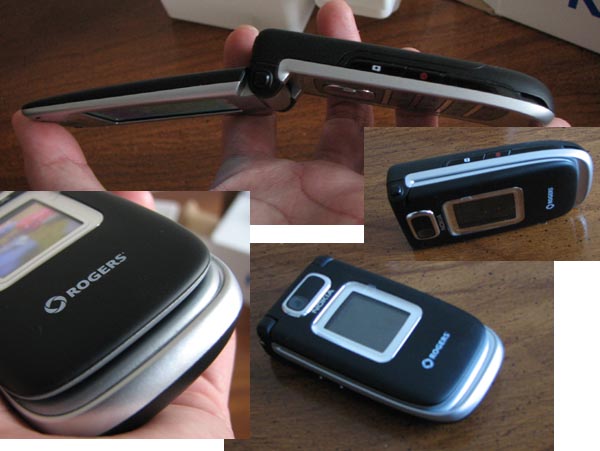 From the home screen, you can immediately access at least six different functions. Each direction on the five-way navigator can be made into a shortcut for a commonly used function, like the phone book, recent calls, multimedia player, and so forth. Each of the two soft keys can also serve a similar purpose. Nothing too ground-breaking here, but if they neglected to include these quick access keys, I’d definitely be complaining.

The menu itself presents you with eight icons, not quite filling the entire display (it looks like there’s enough room for four icons high, three icons across). The cursor defaults on the center function — web — where you can download new ringtones, check movie times, and all that other WAP goodness that you may or may not find useful. The rest of the stuff is pretty standard — my files, applications, log, messaging, settings, contacts — except for the handy instant access to instant messengers. You’ll notice that “games” was not a part of that list. That’s because you have to go into “applications” before you can get your mobile gaming action on. Even then, the only title this comes with is a trio of Gameloft demos. Yes, demos. No full games.

I was never one to read an instruction manual from cover to cover, much preferring to muddle through the menus myself. As such, it took a little bit of effort before I could find such basic functions as a calculator and calendar. These are buried in the “My files” feature. From there, you choose “organizer”, and only then do you gain access to an alarm clock, to-do list, and so on. Of course, you could always set up a shortcut to use from the home screen.

The music and media players are accessed separately, but they are essentially the same thing. Again, this probably won’t replace your iPod (or Sansa, Zune, iriver, whatever), but it’s “good enough” as a temporary solution. Videos can be enjoyed in landscape mode using “full screen”. You can also choose to organize your videos as a list, a list with details, or in a grid. Nothing jaw dropping, but reasonable adequate. The microSD expansion slot is a little tricky to access: you have to remove the battery cover. A shame, really, for a phone that is clearly multimedia-minded.

It’s not the sexiest phone out there, but with a fairly good feature list, the Nokia 6133 from Rogers Wireless can be best described as “adequate”. They’ve tried their best to include all the latest features — like a megapixel camera, multimedia player, SMS, mobile web, instant messengers, and so on — but none of them are implemented in such a way that will make you go, “Wow.” I enjoyed using videotones (using my own videos), and the one-button flip opener was certainly nifty. In the end, if you’ve only got $100 to spend on a cell phone (and you’re willing to sign a three-year contract), the Nokia 6133 will fit most of your basic needs and do an adequate job of doing what it needs to do.